When the ColonyNetwork contracts are updated to new versions, ColonyJS will need to be adjusted to support these versions. ColonyJS tries to make the interactions with the ColonyNetwork as easy as possible by introducing certain helper functions and by providing all the typings for the different contracts and their individual versions. Follow this guide to undertake the necessary steps to make ColonyJS support the new contract versions.

First we need to create the relevant contract ABIs and store them in the ColonyJS repo (these are just .json files containing information about the contract interfaces. We will be generating them in the colonyNetwork repo which is a submodule of ColonyjS.

Make sure you have the correct node version

Go into the vendor/colonyNetwork subdirectory and check out the correct tag for the latest ColonyNetwork version (here glwss):

Update all git submodules and install all dependencies (see also this guide):

Prepare the token submodule (and delete any existing build artifacts):

You will need Docker installed and running to compile the contracts. It is however possible to disable Docker for the builds, see here for more information.

Then back in the vendor/colonyNetwork submodule:

Now we should have all the necessary contract ABIs ready. Next we extract those using a helper script within ColonyJS. Execute the following script. For the tag name use the tag checked out in the colonyNetwork directory (here glwss):

That process should be fairly quick. A directory called src/abis/glwss should have been created, containing all the required ABIs for the next version (and more).

For ColonyJS, we use TypeChain to create the TypeScript typings for the individual contracts. To make the process easier we provide helper scripts that do most of the heavy lifting.

First we need to find out all the latest versions of the contracts that were updated. Go to the colonyNetwork repository in GitHub, select latest release tag (e.g. glwss). Go to contracts, look at colony/Colony.sol, and all the extensions

In scripts/build-contracts.ts adjust in RELEASE_MAP. If the colony version you see is newer, add the tag and adjust latest to the next version ( add 1). Do this with all the extension contracts as well (and add contracts if any were added in the new release). If a contract wasn't updated (no new version) you don't need to do anything for that one there.

The type definitions will be placed in the src/contracts folder. You will see subfolders being created for all contracts and their versions. Next, we will integrate the new types.

Adding new clients to the exports​

One notable exception are the individual augments files (basically all the files in the augments folders that are not commonAugments). There you need to adjust the ValidXXX types to add the newest version of the Colony or extensions.

Now we create ContractClients for all the versioned contracts. They are usually called XXXClientVX.ts and reside in the src/clients/(Core|Extensions) directories. Also here just follow the patterns already established in previous versions. This is how a bare minimum ColonyClient might look like:

We are adding the common augments and also individual augments that were deprecated in previous versions (AddDomainAugments and MoveFundsBetweenPotsAugments). If these are still supported in your version, you will need to add them, too. Do this for all versioned contracts (Core and Extensions).

Next step is to look for contract methods that require permission proofs. If there are any, this will require us to create new augments. For that we look at the generated type definitions as they are much easier to read. We should be looking at a diff between the generated TypeChain files of the previous version (of for example IColony.ts) and the latest version. A good tool to do that with would be delta. 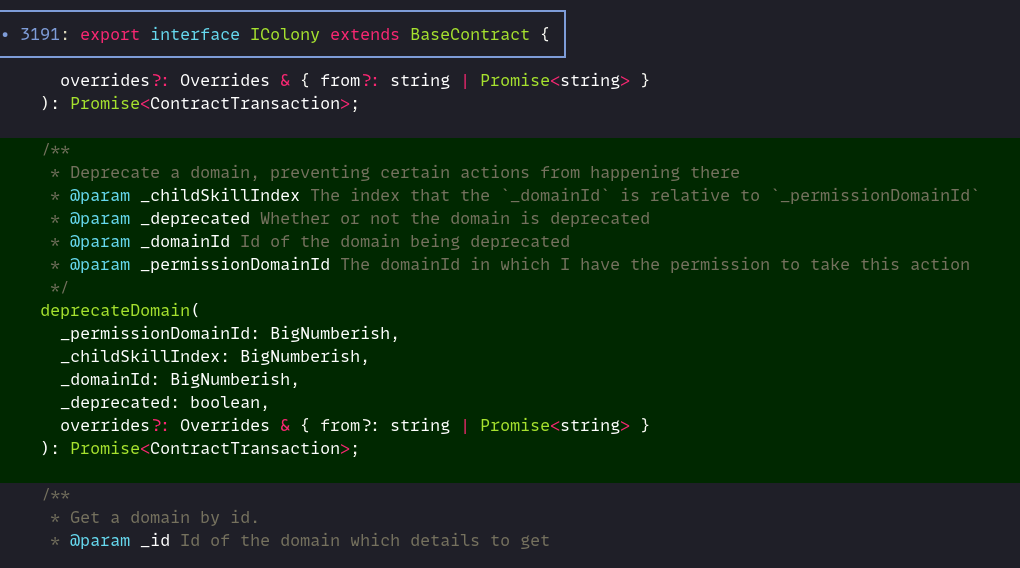 Now we need to create an augment file for this. Just copy the latest Core/augments/augmentsVX.ts and start from there. Adjust all the version numbers to your version (also the X in the filename). You will see a bunch of augments already set up. You can use this as a guide for your augments. First adjust all version numbers by adding one. You will need to keep all ColonyAugmentsVX references that were imported, plus the last version.

Also set the ValidColony type to just the latest one (as these functions do not exist in previous versions of Colony - that's why we're doing all this in the first place):

This is a bit tricky, but when you're stuck, just compare how the update of the two previous versions was done and follow the pattern. Remove all methods in the Estimates object and in the ColonyAugmentsVX object except for one to use as a template. Adjust the comment and the signature to reflect your method name (here: deprecateDomain and deprecateDomainWithProofs) and arguments. Make sure that _permissionDomainId and _childSkillIndex are removed from the parameters as they will be figured out by ColonyJS. Do not forget to adjust the parameters in the Doc comments (both estimates and the transaction itself)! You can copy the text from the contract comments.

This is what we end up with for the deprecateDomainWithProofs method:

These are only the types, so we still have to add the implementation. This is similarly straightforward. In the implementation you call the function getPermissionProofs with thedomainId the transaction is taking place in, as well as the role required. To find the required role, find the function in this file. For deprecateDomain we found this line:

That means we will need the Architecture Role for this. So this is what the implementation looks like:

Also add the estimate version in the same way. Again, it's super helpful to look at previous patterns and just follow them through.

Next we need to adjust the bindings, where the functions that we defined are actually added to the Colony Contract. Keep all the previous binding types and add the new version. Make sure that addAugments returns the newest version type:

The only thing left to do is to integrate that file in the newest ColonyClientVX:

Update the addAugments function to the newest version of the file that we just created to use it in the instantiation:

Now we're done with this file. Repeat that process for all new functions that have a _permissionDomainId and a _childSkillIndex for all new Colony and Extension methods.